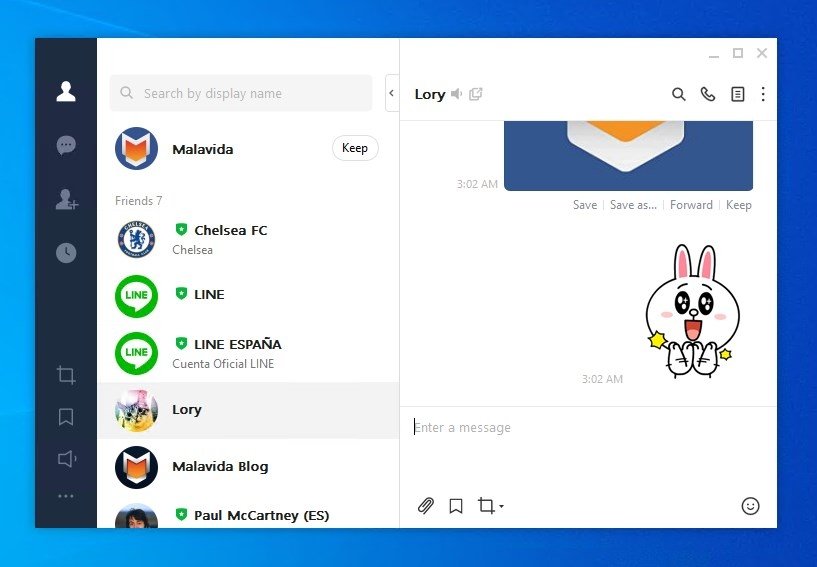 One of the greatest inventions of our time was definitely the instant messaging. What would you do without WhatsApp or Facebook Messenger? Return to ancient SMS messages? Revive classic phone calls? No, we do not have such a thing. Life is much easier exchange text messages, photos, videos, documents, and locations directly without any effort directly from our mobile device, either Android or iPhone.

The forerunner of WhatsApp for PC.

Well, from our mobile, but also from our desktop with Windows, Linux or macOS, because recently, everything Chat and messaging applications have developed their own PC versions. Remember when you craved a WhatsApp for PC? Well, a few years before its release, there was already an application of this kind that ran, not only on iOS and Android thanks to the APK installation file but also on Windows. We are talking about LINE, a chat, instant messaging and VoIP application that gives you everything you expect from such software (messages, videos, audio notes, free photo calls, etc.), as well as exciting new features available only in this application.

You can get it with the Download button LINE so you do not have to resort to the official website or the Windows Store, in fact, the version available in the official Microsoft Store only runs on Windows 8.1 and Windows 10. Once installed on your computer, you will be able to maximum features and functions, such as the following:

The truth is that the story behind the development of this instant messaging app is very different from the usual stories we hear. Here, we are not talking about a group of young college students who come up with a brilliant idea and decide to put all their money into it. No, LINE was born in Japan as as a result of the severe earthquake suffered by the Asian country in March 2011 which caused the interruption of conventional telephone systems.

The instant messaging app born in a tragedy.

To that end, employees of Naver’s Japanese subsidiary, the main portal and search engine in South Korea, have developed this application so that they can communicate. Only two months later, it was released to a wider audience and now 6 years later it has over 700 million users all over the world, but mainly in Japan, Thailand, Indonesia, Taiwan and India.

Which one is the best; LINE, WhatsApp or WeChat;

Let’s be honest … You know someone in your close circle of friends who uses LINE or WeChat? Maybe some daring partner is trying to persuade you to go to Telegram because he thinks it’s cool to tell everyone that he had enough WhatsApp and Facebook, but the truth is that no one uses these two Asian apps except in a small group of countries. In fact, you may not have even heard of the application we offer you to do, and maybe only Meet WeChat thanks to Leo Messi’s award-winning performance in one of her most famous ads. So if we choose one of them, our choices are obvious.

A very good application that, unfortunately, no one uses.

However, this does not mean that none of these are bad alternatives for the current king of instant messaging. In fact, this Japanese application is probably much more complete than Zuckerberg’s new game, especially in the desktop version. The possibility of using funny stickers Instead of getting bored of emoji and emoticons, or choosing to follow famous brands or your favorite artists like Twitter, give it added value. All the latest without forgetting that there were already many of the features that WhatsApp presents as innovative features LINE onetime.