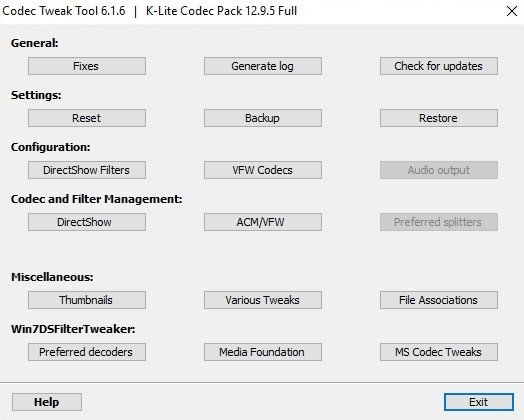 To be able to play media, audio or video files on your computer, you need some files called encoders. What? Still do not know what an encoder is? Well, it is a program capable of encoding or decoding digital signals. Applies to multimedia files, it is one utility used by a player to view video and audio.

These encoders are usually built into media players, but this may be due to a lack of updates or because you are trying to play some form of format that is not very popular, that you may have problems opening the videos properly. You can avoid these problems if you resort K-Lite Codec package, one complete package of encoders, DirectShow filters and tools that will help you play any audiovisual content smoothly on your computer, whether it is Windows 7 or 10 32 or 64-bit.

And while it focuses primarily on video playback, it also offers one wide range of encoders for playing audio files in different formats: MP3, FLAC, OGG, MPC, APE, M4A…

Which one is the best; MPC-HC or VLC Player?

The truth is that there are very few programs that can be compared to VLC Player. However, the media player included in K-Lite is quite a worthy opponent. To that end, it offers several different features, such as faster file uploads, improved support for MKV files, and more hardware acceleration options.

We are talking about the full version of this encoder package, but there are three other versions:

So which is better? Mega or Full? Easy: they are both great encoder packs, but if you are not going to encode and edit videos, you will not know how to make the most of the Mega version.

What about an Android smartphone and tablet version?

Kids at K-Lite have not released any official APK for Android mobile devices. There are other applications that have made the most of their name and popularity for publishing encoder packages on Google Play, but do not belong to this developer.